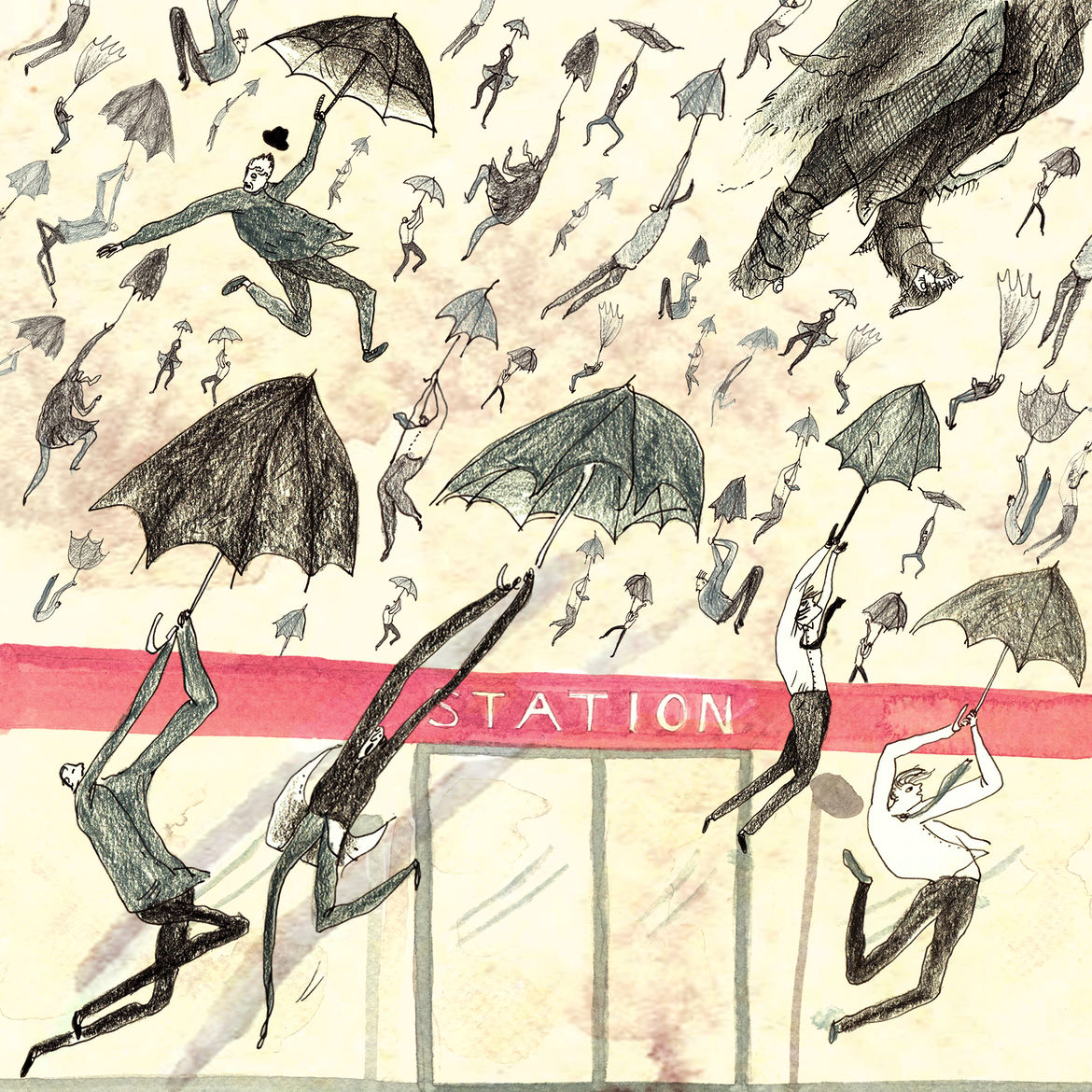 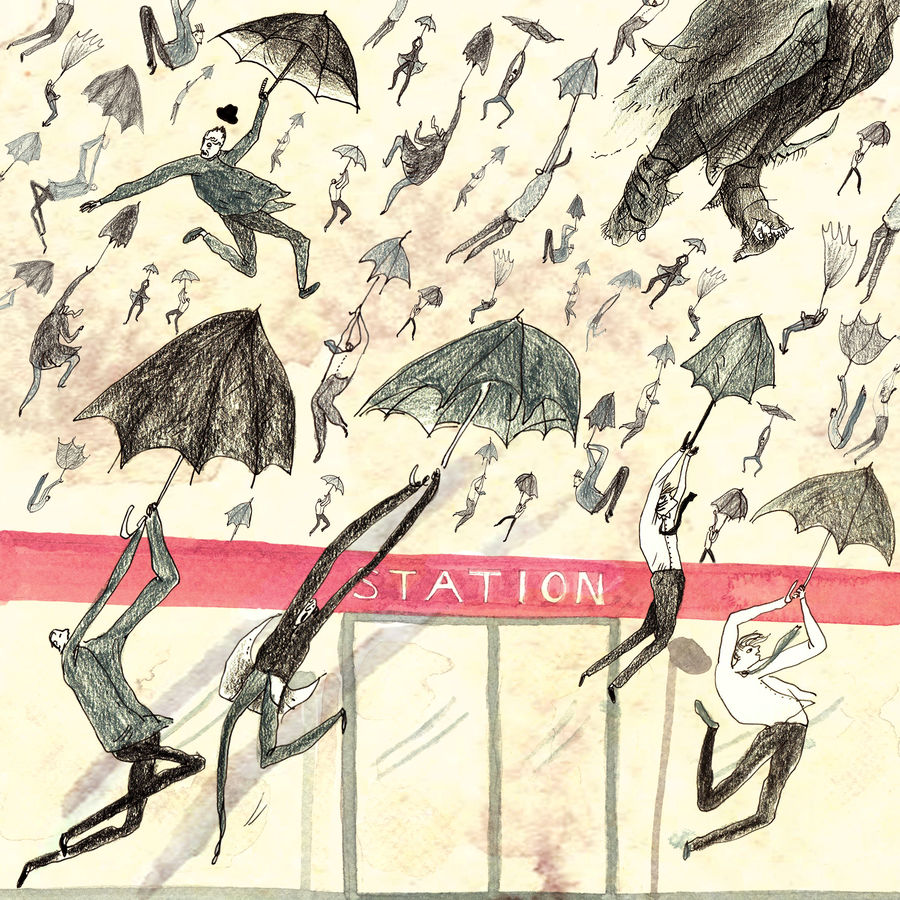 The Reason I Carry Biscuits to Offer to Young Boys

“Was this maybe an extremely dodgy situation for me to be in?”

I was in the bus shelter opposite the train station, taking shelter from the rain while I waited for my mom, when the guy with the umbrella started talking to me. I hadn’t noticed him turn up but the old guy, who was dressed in rags, gave me a friendly smile and offered me a little packet of biscuits. “You look hungry,” he said. “Go ahead, they’re really delicious.” Even though we were in the middle of a huge typhoon and the ferocious wind was howling past my ears, I thought I caught a whiff of the old guy’s sour smell.

“Aw, biscuits!” I said, taking them like a good child. I was clutching the biscuits inside my palm and nervously pretending to eat them when then the guy pointed toward the junction where the wide station road met a smaller road and, out of nowhere, said, “Don’t ever underestimate people like them.” He was pointing at a man in a suit waiting for the lights to turn, desperately holding his umbrella open in the storm.

I didn’t react, but secretly I was pretty worried that he’d read my mind. I’d been watching people just like suit man passing by, laughing at them inside. Any time I saw typhoon coverage on TV, I just had to wonder: What on earth were these people thinking? Walking along looking totally focused on holding their barely open umbrellas in front of them when their clothes, their hair and most likely even their socks were wet through. I was like, Are you sure there isn’t something wrong with your head? Don’t tell me you kowtow to umbrellas, at your age? But I’d never mentioned these thoughts to anyone else.

“Just watch,” said the old guy. “Soon he’ll be down to bare bones.” I didn’t know what he meant, but his voice was strong like a sea captain’s, so I looked to where his gnarly finger was pointing, at the man in a suit holding on for dear life to the guardrail by the crossing. I’d nearly been blown out onto the road there too, earlier, as I battled the rain that blew horizontally into my face. Because it was a junction, the strong winds bore straight at you.

“Three! Two! One!” The old guy shouted, just as the man’s umbrella turned inside out like a rice bowl and its fabric disappeared as though an invisible man had ripped it off, instantly reducing the umbrella to just its skeleton. I was speechless. The old guy’s timing had been perfect.

Associating with people like him was a bad idea. I knew this, but his shabby appearance and offensive smell didn’t bother me that much any more. He handed me another packet of biscuits, and I pretended to nibble them again, apologizing to him in my head for deceiving him. Oblivious to that, the guy started telling a story about some boy from a tribe that lived deep in a forest. It was about what the young kid did to win an umbrella that a foreigner had brought to their village.

“They beat each other with sticks,” said the guy. The wind was whipping his long, tangled hair around, and it looked like the strands were trying to feed on his face.

“That’s right. In that village, they had a custom: once a year, the men of the village would take it in turns to hit each other with a tree branch. So the village chief decided that whoever lasted the longest before letting out even a single sound would win the umbrella. None of the villagers had any idea what the umbrella was for. They thought the foreigners must use it to hit each other, like they did with sticks. No one in the village wanted to avoid getting rained on. Local tradition had it that rain was caused by sylvan spirits, and was essential to the villagers’ reincarnation as insects after their death. People get reborn as insects in their mythology.”

Something unpleasant crawled up my spine, same as if I’d just looked at a cluster of something tiny all packed together, like bug eggs. As soon as the guy had said “sylvan spirits,” I’d suddenly felt fearful and panicked about being right there next to him. Was this maybe an extremely dodgy situation for me to be in? I couldn’t take my eyes off the tip of the umbrella he was gripping. I stuffed the biscuits he’d given me into a trouser pocket.

The guy was still talking, his hair still nibbling away at his face. “The young boy wanted the umbrella so badly that he became the first boy ever to take part in the village custom of the men hitting each other with sticks. His giant opponent kept hitting him and hitting him, but he stuck it out to the end without uttering a single peep. Young boy, not a single peep. Got that? When his towering opponent finally gave a groan at the pain in his arm and conceded, the boy collapsed, and lay still. That’s right: he was dead.

“Can you guess why that young boy wanted the umbrella so badly?”

“He believed that umbrellas could make you fly.”

I was relieved that the story seemed to be over, but at the same time, I was just a little bit disappointed. Somehow, I’d been hoping for a more inspired punchline. I was starting to wonder where my mom was, and about possible ways to safely remove myself from this conversation when the guy pointed to another drenched man desperately holding his umbrella open. “They still believe, too.” Then he counted, “Three, Two, One,” like before—and I couldn’t believe my eyes.

The man, who’d been getting buffeted along, holding his umbrella nearly closed, suddenly stepped onto the guardrail and springboarded off, catching the wind and soaring up high into the air in the blink of an eye.

“All right!” The guy looked to the sky and pumped his fist. “That guy really committed, kept his center of gravity nice and low—I knew he had a good chance!”

I hastily stuck my head out from the bus shelter and looked to the direction where the man in the suit had flown off. Wiping my hair and the rain out of my eyes as I scanned the sky, I spotted loads of tiny human figures floating among the dark clouds. I stared, mouth wide open. All of them were hanging on for dear life, writhing and flailing, trying to keep a grip on their umbrellas. Fifty of them, maybe, or a hundred, or even more.

I could have sworn the old guy was still right behind me, but when I snapped out of it and turned around, he was nowhere to be seen. Or at least he wasn’t in the bus shelter anymore.

Ever since that happened, I don’t laugh at the drenched people on the news any more when the moment their umbrella flips and turns to bones gets shown on loop, and I don’t belittle their mental capabilities. When I pass people in the street who insist on trying to hold their umbrellas open on a stormy day, I know they are far more attuned to things than I am, that they’re fearless and dreaming big. And if I ever meet a boy looking cynical during a typhoon while sheltering from the rain, I’ll be ready to offer him some biscuits and say, “Try these, they’re really delicious.”

On my way home from the bus stop, I gingerly tried one of the biscuits he’d given me, and was blown away. It was crisp and delicate, and better than any other biscuit I’d had in all my eleven years.

The guy was found on the pavement all squashed up the next day, but I still tell this story any time I’m out drinking and need something to entertain everyone. If I tell it right, the part that goes, ‘Catchyalater! Catchyaaa! Laterrr!’ is always a real crowd-pleaser.

translated from the Japanese by Asa Yoneda

Yukiko Motoya is a writer, playwright, and stage director. She won the Noma Prize for New Writers for Warm Poison in 2011; the Kenzaburo Oe Prize for Picnic in the Storm in 2013; the Mishima Prize for How She Learned to Love Herself in 2014; and Japan’s most prestigious literary prize, the Akutagawa Prize, for An Exotic Marriage in 2016. Her books have been published in French and Norwegian, and her stories have been published in English in Granta, Words Without Borders, and Tender.

“The reason I am lonely, the amoeba thought, is that I am totally alone. So it had sex with itself and made another amoeba.”

“I ran into my father three years after his death. I was on my way to the library.”

Patti never mentioned her own daughter. I realized she was a little broken too, like the rest of us. She had a tender point she hid from us, from me: the enemies.