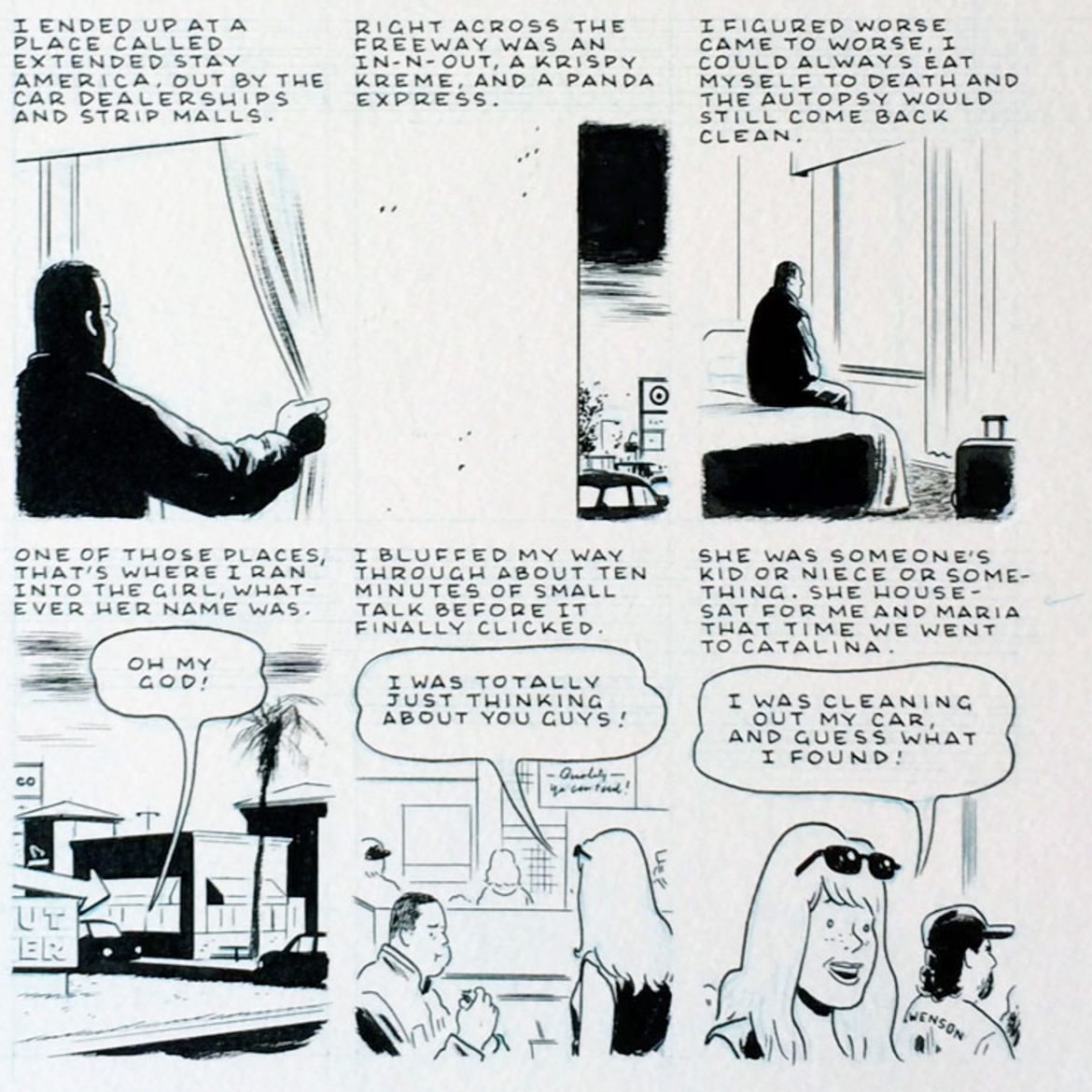 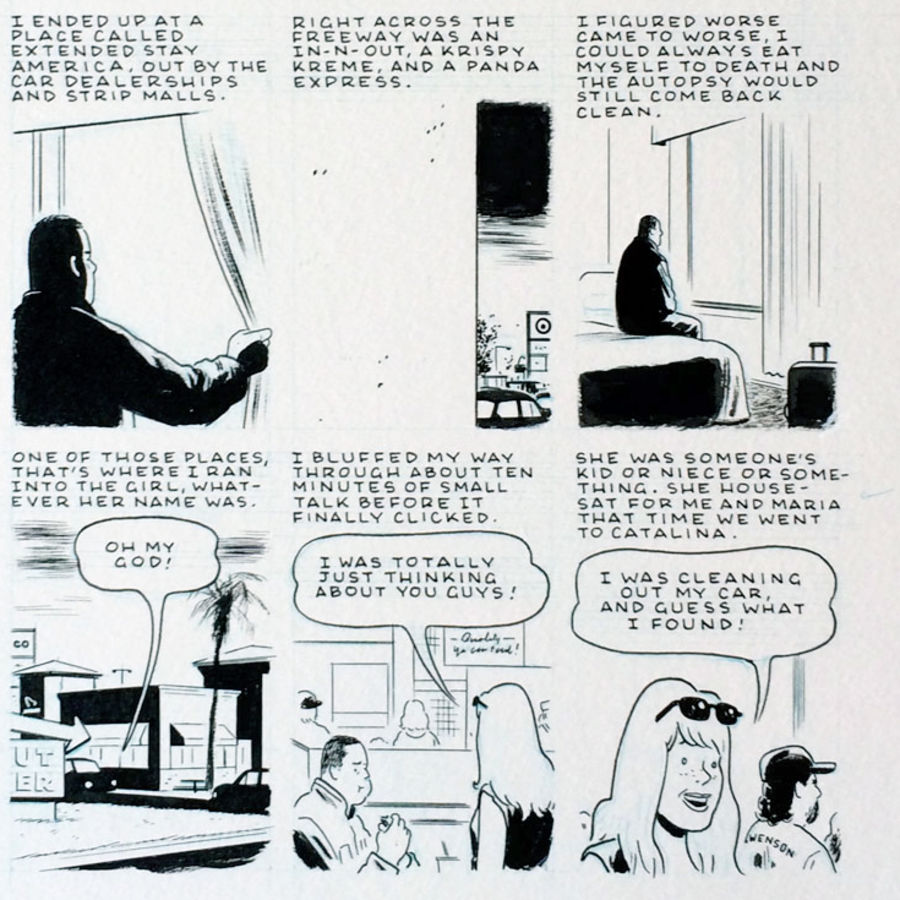 When I Think About Giving Up Writing
Teri Vlassopoulos

“God accepts more prayers on Fridays”: Marking God’s Time in Our Muslim and Orthodox Jewish Families
Saadia Faruqi and Shoshana Kordova
How To

How I Wrote “Intruders”

“There’s a lot of stuff that isn’t in the story explicitly, but it’s helpful that I still figure it out.”

Adrian Tomine’s new comic book, Killing and Dying, will be published next week. For our Beginning Middle End series, he explains the step by step process he went through to write “Intruders”,  one of the stories  in his collection—from notes on legal pads to laying out to inking the page.

I made a lot of exploratory notes in yellow legal tablets, writing down any thoughts I had about who the character was, how I should tell the story, little bits of dialogue—pretty much just free-associating. Little by little, I made decisions, ruled things out, and eventually arrived at something resembling a plot and a basic sense of what the pages would look like. This is the stage where I do a lot of calibrating, trying to gauge how much I should emphasize certain ideas and elements. In general, I try to let myself go over-the-top and make things painfully obvious, and then I try to gently nudge it back in little increments until it feels right. There’s a lot of stuff that isn’t in the story explicitly, but it’s helpful that I still figure it out. I used to do this kind of writing in fancy sketchbooks and hardcover notebooks, but I realized that the quality and expense of those types of books was inhibiting me, triggering perfectionist tendencies that weren’t useful at this stage.

I broke the story up into a layout of pages and panels by typing on a template I set up in InDesign. Sometimes I can just draw a story panel-by-panel, making it up as I go, and that can lead to great results. For this story I was butting up against the limit of my page count, so I had to be very precise about making everything fit. This step allowed me to edit: tweaking the narration, moving scenes around, getting rid of anything extraneous. Then I printed out these layouts and sketched in the images and dialogue with a blue pencil. Even after all that, I still wasn’t happy with some of the narration, so you can see in the upper-left corner I taped on a late revision. I like having the revision hinged on one side like that so I can flip back and forth and see how each version reads with the rest of the page.

This is the final artwork, drawn much larger on Canson Montval watercolor paper. I penciled the artwork with a Muji mechanical pencil containing 0.5 light blue UniColor lead, then inked it using Pitt markers, a Tachikawa “school” nib, a Windsor & Newton series 7 brush, and some Dr. Martin’s Tech ink.

This story, like most of the stories in Killing and Dying, takes place in some kind of weird hybrid of Fresno, Sacramento, Emeryville—basically the kind of small California towns that I grew up in, but aren’t usually portrayed in movies and books. I did a lot of sketching from life and online research so that I could accurately draw the kind of suburban California architecture that I feature on the book’s cover and throughout the backgrounds in the stories (and on this page): chain stores, fast food restaurants, freeway overpasses. It's an attempt to recapture a certain mood or atmosphere that I associate with my years living there, which is very different from that of my present surroundings here in Brooklyn.

There were certain panel compositions that repeated throughout the story, so I sketched those panels on tracing vellum. Whenever I needed to repeat that panel, I could use a light box and quickly trace the basic lines onto the watercolor paper.

When I was finished inking the page, I went back and added some final corrections and detail. I used Dr. Martin’s Bleed-Proof White to add some rough highlights on the guy’s arm, and a straight razor to pick away at the black ink, giving the lower-left corner of the panel that rougher, fuzzier edge.

The final step is to scan the artwork into the computer and clean it up a little bit. Most of the stories in “Killing and Dying” are in color, but I always envisioned this one with a dark, monochromatic look, with more of an emphasis on the actual lines of the drawings. So I just added those blocks of very faint color to help define the panel edges and give the whole thing, I hope, a suggestion of the haze of memory or dreams.

Killing and Dying is published on October 6. For more about the book, go to Drawn & Quarterly.

Adrian Tomine
Adrian Tomine was born in 1974 in Sacramento, California. He began self-publishing his comic book series Optic Nerve when he was sixteen, and in 1994 he received an offer to publish from Drawn & Quarterly. His comics have been anthologized in publications such as McSweeney’s, Best American Comics, and Best American Nonrequired Reading, and his graphic novel Shortcomings was a New York Times Notable Book of the year. Since 1999, Tomine has been a regular contributor to the New Yorker. He lives in Brooklyn with his wife and daughters.
+ Follow

Against Fame: On Publishing, Popularity, and Ambition

“The problem with fame is not its rarity; it’s that it is out of our control.”

How To | Growing Faith

How to Mark a Child’s Religious Milestones

Shoshana and Saadia discuss milestones and coming-of-age ceremonies in their respective faith traditions.