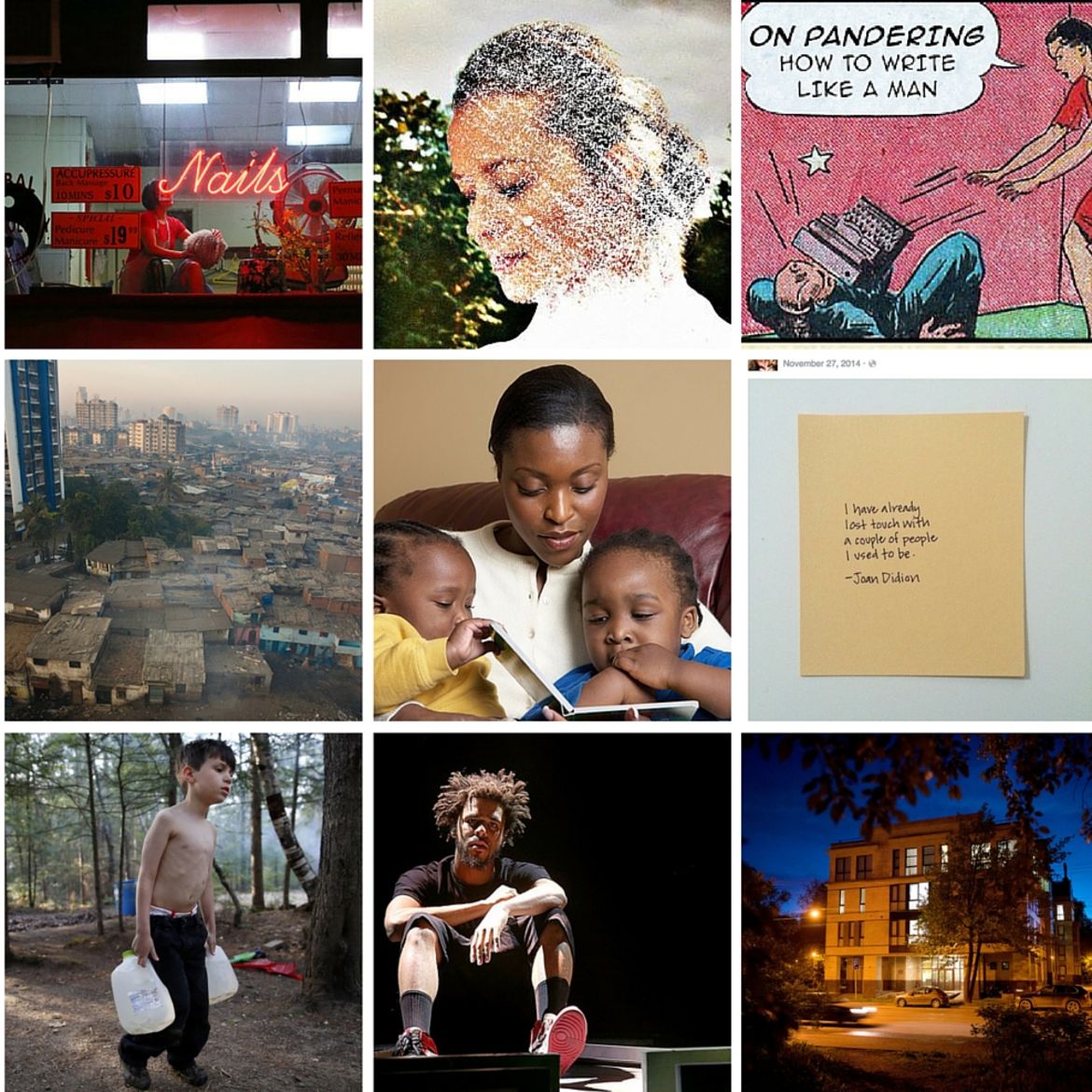 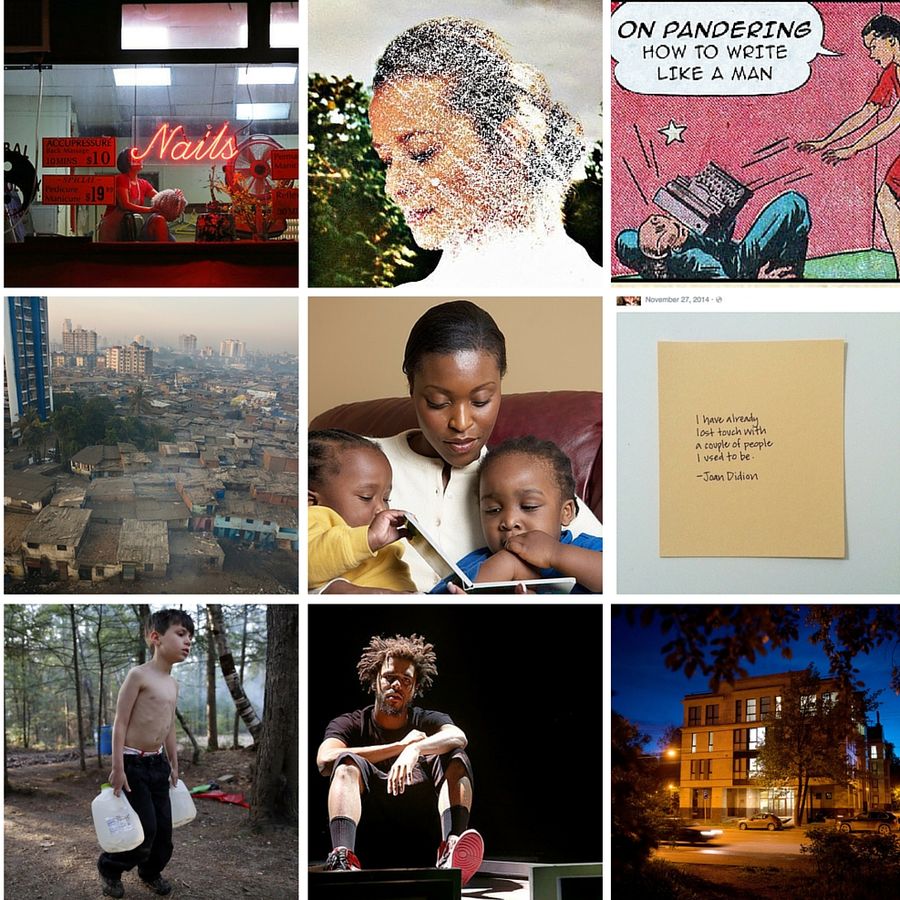 Finding the Words: on writing and amnesia
Mensah Demary

Speaking Into the World
Eve Ewing

Count It All What? On Titling My Novel
Hannah Gersen
How To | Shop Talk

A celebration of some of the best narratives we read online this year.

“The Price of Nice Nails” by Sarah Maslin Nir, The New York Times

“The juxtapositions in nail salon workers’ lives can be jarring. Many spend their days holding hands with women of unimaginable affluence, at salons on Madison Avenue and in Greenwich, Conn. Away from the manicure tables they crash in flophouses packed with bunk beds, or in fetid apartments shared by as many as a dozen strangers.”

“Raziel Reid, who at 24 is the youngest ever person to win the Governor General’s Award for Children’s Literature, was 18 at the time Larry Fobes King’s death was making headlines all over the world. Widely considered the worst, and most publicized homophobic hate crime since the 1998 murder of Matthew Shepard in Laramie, Ohio, the tragedy of King’s story resonated with Reid; his award-winning debut, When Everything Feels Like the Movies — one of five books selected for this year’s Canada Reads, the popular (and generally populist) CBC radio program — is heavily inspired by Larry Fobes King, the boy who died in vain, just asking for a valentine.”

“Do black children’s lives matter if nobody writes about them?” by Daniel José Older, The Guardian

“Equity is a long way off, but the 89% white publishing industry has (finally, grudgingly) began to publicly embrace the importance of diversity; it has acknowledged the very basic truth that we exist. The world is diverse; we need books that tell us the truth about ourselves, and ones that [sic] don’t replicate the facile lies and erasure present in centuries of literature.”

“To celebrate my final menses struck me as having the potential to be wonderful and weird. Or just weird. I worried the women I invited would come only because they felt obligated. I worry about being a burden to my friends a lot these days, because I am often blue and hardly recognize myself. I broke down crying the last time I had dinner out with two of these women, because everything I had been through flooded me at once, and it was unbearable.”

“The Agency” by Adrian Chen, The New York Times

“The word ‘troll’ was popularized in the early 1990s to denounce the people who derailed conversation on Usenet discussion lists with interminable flame wars, or spammed chat rooms with streams of disgusting photos, choking users with a cloud of filth. As the Internet has grown, the problem posed by trolls has grown more salient even as their tactics have remained remarkably constant. Today an ISIS supporter might adopt a pseudonym to harass a critical journalist on Twitter, or a right-wing agitator in the United States might smear demonstrations against police brutality by posing as a thieving, violent protester. Any major conflict is accompanied by a raging online battle between trolls on both sides.”

“The Scientists Who Want to Fix America’s Guts” by John Swansburg, Science of Us

“The American diet is high in processed foods digested in the stomach and small intestine, leaving little fuel for the microbes in our large intestine. The result, they say, has been a ‘mass extinction event,’ in which species of bacteria that have lived in our bodies for most of human history have died off, making it harder for our microbiota to perform its role in tuning our immune system and regulating inflammation.”

“Slumming It” by Daniel Brook, The Baffler

“Before long, the idea of the market-affirming slum went global. Shantytowns all over the developing world were reconceived as industrious anthills of pluck and ingenuity, places that showed capitalism at its best. It was a stunning feat of intellectual alchemy, like a pundit using Soweto as an illustration of the wisdom of apartheid.”

“A Highly Scientific, Real-Life Exploration Into How Anyone Could Possibly Like J. Cole” by Shea Serrano, Grantland

“Before the concert and then also after the concert, I sought out conversations with a few different people whom I knew had dealt with J. Cole on multiple occasions, either in business settings or leisure settings (or both). I wanted to get some insight into what he was like beyond what I’d happened to read on my computer. Nearly all of them responded with a version of the same answer: ‘He’s one of my favorite people in music. He is exactly who he presents himself as.’ I was always glad to hear this response. I like J. Cole as a human. His positivity is undeniable.”

“A Cartoonist’s Diary” by Jeremy Sorese, The Comics Journal

“Joan Didion, as a writer, is the perfect cipher for the writing process: that mythical time of creation where you are consumed by a painful, wrenching, autonomous urge to lay bare your thoughts, and the resulting sentences are beautiful enough to take away the breath of anyone lucky enough to read them. They remove all oxygen from the writer, leaving only a shell of a woman at her most beautiful: frail, small, weighted down only by a silky dress and nothing as obtrusive as actual human flesh. But it is not, I maintain, Didion’s responsibility to correct this mob mentality. And it is not by any means her fault, despite the opinions of her detractors.”

“The Life and Times of Strider Wolf” by Sarah Schweitzer, The Boston Globe

“Strider’s face flattened in panic. Caseworkers had explained it would be like this with him. He’d lost so much, any whiff of rejection set off bells of alarm. His traumas were as much a part of him as the trees he climbed or the magic brooms he fashioned from sticks. Researchers now understood that trauma could alter the chemistry of developing brains and disrupt the systems that help a person handle stress, propelling a perpetual state of high alert. The consequences could be lifelong. As an adult, he’d be more likely to suffer anxiety and depression and heart disease and stroke. His ability to hold a job, manage money, and make good decisions could be compromised. And there was evidence, controversial but mounting, that he could pass on these traits to his children.”

“I am trying to write something urgent, trying to be vulnerable and honest, trying to listen, trying to identify and articulate my innermost feelings, trying to make you feel them too, trying a kind of telepathy, all of which is really fucking hard in the first place and, in a culture wherein women are subject to infantilization and gaslighting, in a culture that says your “telepathic heart” (that’s Moore on July) is dumb and delicate and boring and frippery and for girls, I sometimes wonder if it’s even possible.”

“Gentrification elsewhere made cities safer, but not so far in New Orleans” by Brett T. Evans, The Times-Picayune

“The recent carjacking of retired newsman Richard Angelico outside of his home on one of the most coveted blocks of real estate in the Bayou St. John neighborhood highlights something crucial: As the gentrification of New Orleans proceeds, with its various boosters and detractors, it is astonishing to note that one of the chief byproducts of gentrification—namely, a city getting safer—has completely eluded New Orleans.”

“The Death Treatment” by Rachel Aviv, The New Yorker

“In the drawer of Godelieva’s bedroom desk, Tom found drafts of several farewell letters that she had written to friends, her neighborhood association, and a chorus that she sang in, as well as a master list with an ‘X’ by each name, as if she were composing thank-you notes after a party. She thanked her friends for their companionship, apologized for causing them pain, and explained that ‘the loneliness, no chance of a cure after forty years of therapy, nothing to look forward to—all this has led me to see that the only thing remaining is a dignified end of life.’”

“The best books, like the best friends and their best emails, like the most intimate and comforting conversations, make us feel understood. They make us feel like home is home. The Odd Woman and the City can be read as a guidebook for how to exist: how to exist while walking on the streets in the city where you live, how to exist inside a friendship, at a bizarre dinner party, how to exist in a world of strangers close by.”

“The Meaning of Serena Williams” by Claudia Rankine, The New York Times

“To accept the self, its humanity, is to discard the white racist gaze. Serena has freed herself from it. But that doesn’t mean she won’t be emotional or hurt by challenges to her humanity. It doesn’t mean she won’t battle for the right to be excellent. There is nothing wrong with Serena, but surely there is something wrong with the expectation that she be ‘good’ while she is achieving greatness. Why should Serena not respond to racism? In whose world should it be answered with good manners? The notable difference between black excellence and white excellence is white excellence is achieved without having to battle racism. Imagine.”

Enter your email address to receive notifications for author The Editors

We’re looking for a full-time, paid editorial fellow to work on our daily digital magazine.

Meet the LGBTQ+ instructors of Catapult!

Meet the LGBTQ+ members of our staff!

On Envy, the MFA, and Writing Under Capitalism

“No one had told me to prepare myself for this—for wanting what someone else had.”

Writers, take note: A submission says, please pick me, I’ll be waiting. A pitch says, catch me or you’ll miss the ball.