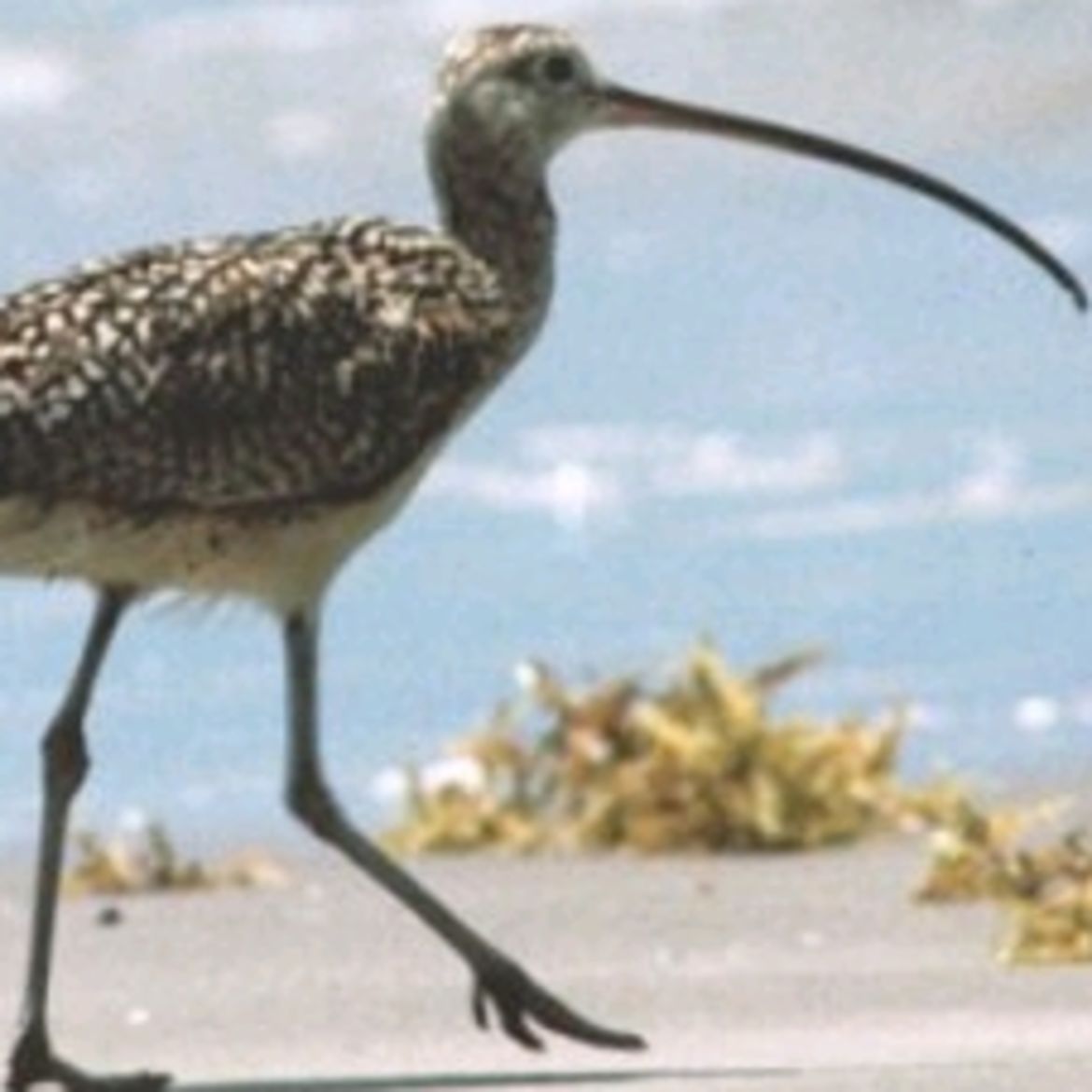 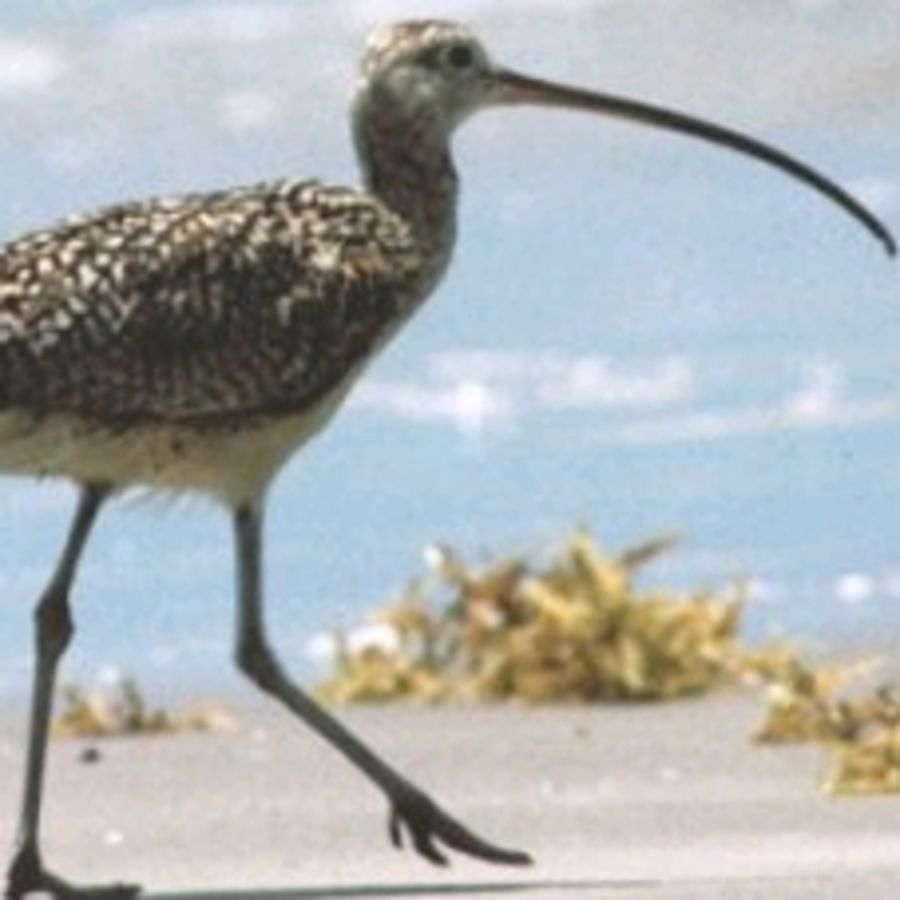 The Story Of The Backward-Knee Bird

On the day the Lord created birds he gave them all the gift of flight but he also gave them other characteristics and anatomical distinctions that, in his wisdom, would help them on their journey. But birds, not unlike the flightless species they share the world with, often failed to see the goodness in God's plan and tended to complain about the challenging aspects of their winged existence.

The Long-Billed Curlew was an unhappy creature, carrying a chip on his shoulder and constantly carping about how unfair life was. To be sure the other birds who shared the shoreline with him did all they could to avoid him, generally chirping warnings to each other whenever they saw him approach. Curlew had a way of making a sunny day stormy and because he never stopped bellyaching about the way he was built, the other shorebirds started calling him They asked him if they could use his beak as a pole-vaulting pole and most of the birds in the neighborhood were quick with the Pinocchio joke. It was true that Curlew was oddly constructed and like all animals that are different, he saw a curse where he could have seen a blessing.

Imagine if you had a candlestick where your nose was supposed to be. Curlew didn't have to imagine because if he ever stopped thinking about his telescopic appendage he was quickly brought back to reality, as he was forever beak-bumping into things or poking objects he never intended to poke. Still, on his best day, he could tolerate his curved projection, after all, most of the flyers on the shore had long bills and when food was scarce and most birds went hungry, Curlew was well fed. On these days his horny bill was more like a magic wand, as he could plunge it deep into the sand and find crabs that no one else could reach.

No, for the complaining Curlew his drumstick of a bill was not his biggest peeve, what he hated most about being a Curlew was the two stilts he had for legs.

Curlew knew that he had to have long legs just to keep his bill from dragging in the sand, and during the day he could mostly handle it, but at night or when it was time to nest, his legs were like a pair of chopsticks, always poking out in unruly directions. He could never get comfortable, his legs just didn't seem to fold right, like a roadmap that had been opened but can't ever be restored to its original form. So he couldn't sleep and he adjusted and readjusted and twisted and stretched and just wished he was a plain, ordinary sparrow.

Then one night when he returned to the hollow he had a thought, and maybe it was birdbrained, but he was desperate, he thought, . And that was exactly what he did. He found a soft spot among the weeds and grasses, nestled into it as best he could, removed his legs and set them within easy reach of his long bill.

The next thing Curlew knew it was morning. He had never had such a peaceful night's sleep and as he braced himself to get up, nothing happened. It was then that he remembered that he had removed his legs, but when he looked about, they were nowhere in sight. It had been windy that night and now his legs could be almost anywhere. He scanned the horizon in all directions and about fifteen feet beyond a little sand berm he noticed what appeared to be two sticks, kind of crisscrossed on top of each other like the "X" that marks the spot on a pirate treasure map.

Pondering his predicament, Curlew thought about how ironic it was that a winged creature should be in such urgent need of his feet. He knew that he had no real friends to come to his rescue and he also knew that if the shoreline bird population found out that he took off his legs when he slept ... well ... he just had to get to his legs before anyone found out.

He spent the next few hours mostly hiding down in the tall shore grass and praying that the wind would die down and not push his spindly legs further down the beach. As the sun started to set, Curlew knew he needed to act. He started to rock his body side to side, hoping that this would somehow propel him across the sand, but all of his efforts only produced a sandy cloud of dust. Next, he started leaning forward and back and that created the of movement but no movement in fact. Finally, he tucked his long curved bill tightly toward his chest. The length of his beak almost reached back to the tip of his tail and now, with his body contorted into a feathery ball, he pushed forward with his tail feathers and then rocked back, forward and back, trying to create some momentum. On the fourth or fifth attempt, he actually somersaulted over lurching forward a foot or two.

The next thing you know, Curlew was blindly somersaulting across the beach until, dizzy from all the tumbling, he lay motionless, raising his beak from his chest and trying to clear his head. When he opened his eyes and collected his thoughts he was within beak's reach of his wandering legs. It was near dark now. He used the tip of his bill as a rake, reaching it out and pulling his limbs closer to him. Exhausted, relieved, embarrassed, humbled, he used his wings and his bill as a pulley system to get his legs back on.

Curlew was famished, but it was late now so he started walking back towards the hollow, and after a few steps, took wing and drifted over the water's edge. He thought about how lucky he was to be of the sky and, for the first time ever, was joyous just to have two legs of any sort. It wasn't long before Curlew landed and walked a pace or two, to the place he nested - legless - the night before. As he walked, his skinny legs felt strange but for some reason, when he went to lay down, his legs seemed to fold up perfectly, easily, comfortably, like the landing gear retracting gracefully into the belly of a plane.

When morning dawned, Curlew was eager and refreshed and without thought, rose to his feet. If a guy with an eight-inch bill could smile, that proud expression would have been his this day as he looked down and admired his long knobby legs.

Still, something felt strangely odd, and as he gazed down at the legs that had so long tormented him and had so easily been blown across the sandy terrain, he saw that he had, in fact, put his legs on backward. No wonder each step felt like a stride against the current. Almost at once he decided to remove his bony limbs and install them in accordance with the owner's manual. But just then he flashed back to the night before, to how easily he slept, to how wonderfully his legs had cooperated. He laid down, he stood up, down, up, down, up. He walked a few steps and then executed another series of , like someone trying to free a rusty hinge.

Curlew decided to remain a bird. He felt that while walking might take some getting used to, the backward orientation was ideal for the long-legged contraction that was needed for sleep. He thought he'd be happier that way. It wasn't perfect, but why spend all of your time complaining about it he thought. God designs a bird one way but, it seems, he's perfectly okay with a bit of modification ... if it will help you better stand on your own two feet.

When Your Landlord Shuts Off the Water Without Telling You First Because He's Fixing a Leak in Apt. 43 Right Above You

And all you keep thinking about is the sex you're not having with people you aren't dating.

The Gilmore Way:A Year in the Life

What we’re reading and loving.