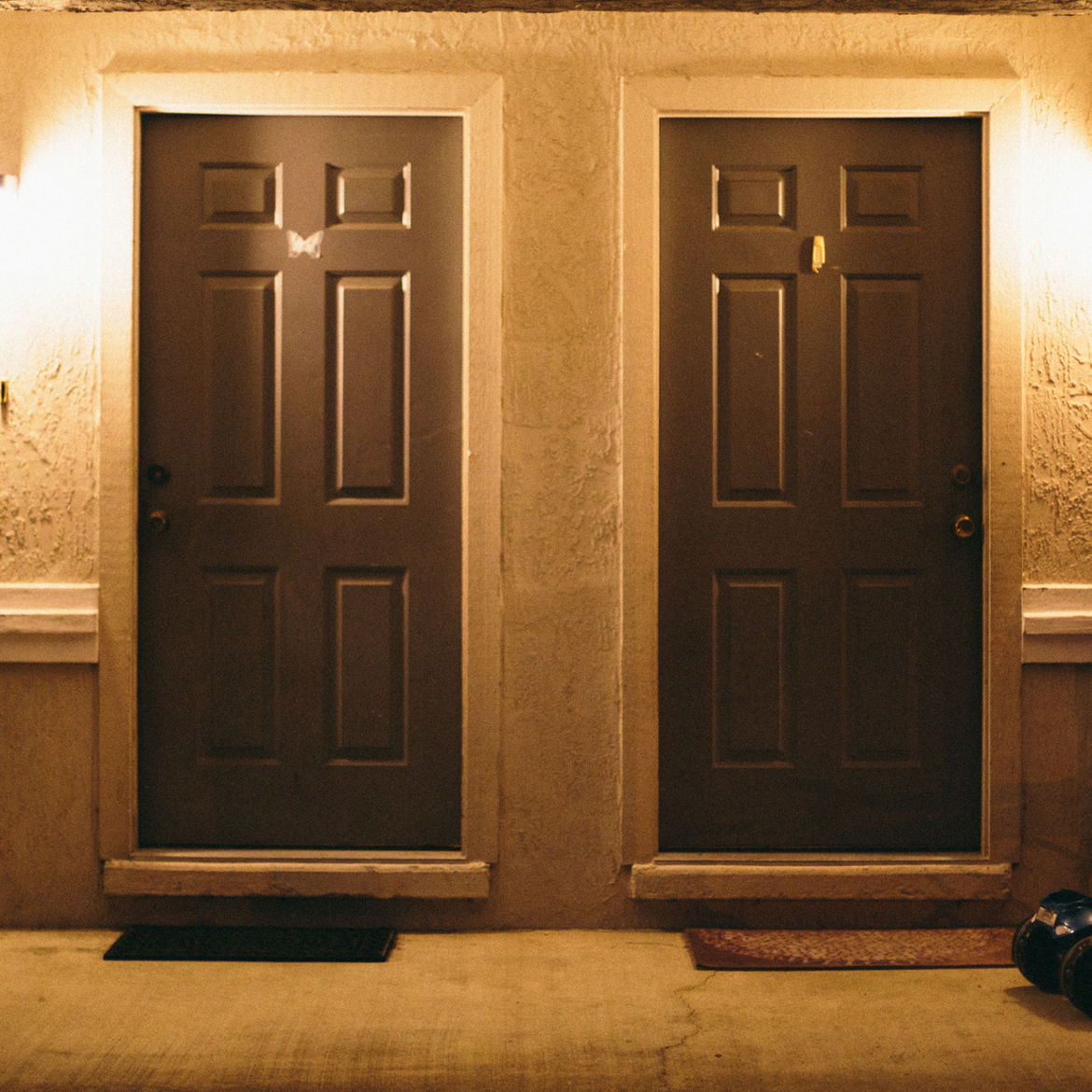 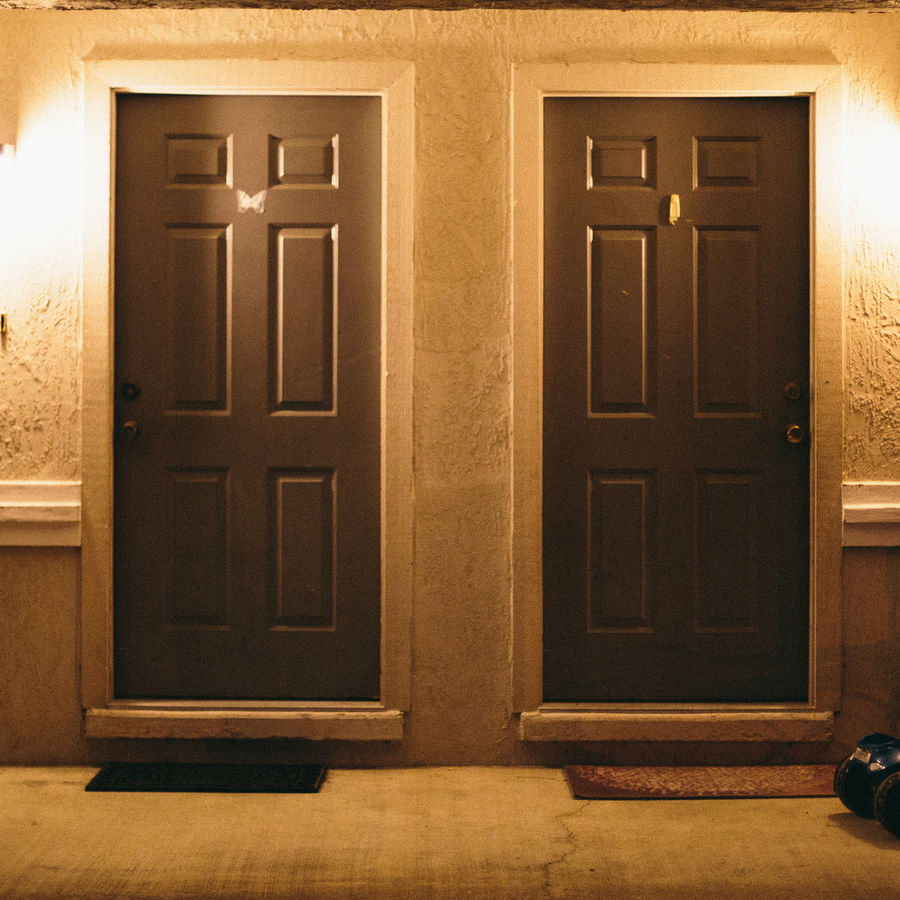 I got it this time, I swear, look, try this card, there's money in the bank, it's gotta work." I hear Julia through the wall, yelling at whatever company she's yelling at, trying to buy something or other. Strange, really, that she keeps buying things. Or maybe she's not buying things. Maybe she's trying to pay bills. That'd make more sense, but then again, she doesn't make a whole lot of sense, Julia. She's kind of a weirdo.

There is only one thing that Julia cares about. Not the normal things, like food, like water, like air, like companionship. Those are normal things to want. Those are inborn, or something like that. Something evolutionary. Environmental, maybe. I took an online class about this shit this one time, and they said so many different things about how people are who they are that I got dizzy. If there's no one answer, then what's the point, right?

But Julia. Julia wants one thing. And that's to be debt free. She's been living in debt for coming on thirty years now. I hear her talking to her mom, God bless that poor old lady, she must be pushing seventy-five, eighty, some big number that we all hope to get to, and still her daughter calls her crying about how much money she owes. She pays her rent on time, Julia, no problem, and that's good, otherwise I'd need to kick her sad ass out. But nah, she somehow scrapes that together. But it's like she thinks that owing the bank is the worst thing in the world, even when the banks screwed us over. All of us, every single one, even the rich folks got all nutty in oh-eight.

"How is it being rejected? How? I don't--" She gets cut off and someone else is doing the talking, and Julia starts to cry. "Okay. Okay, I'll check my account. I'm sorry. I'm so sorry." I'm sitting on my couch, which is right against her wall, ground floor, I'm apartment 100, she's 101. Right next to me. Keep your enemies close, people say, right? I say, keep your problematic tenants closer. 'Sides, I don't have any enemies. Sure, some tenants I kicked out in the nineties might still hate me, but what do I care, right? They're not coming back and beating on my door or throwing rocks through the windows like some of those asshole kids in the neighborhood.

Julia's off the phone now, and I can hear her getting ready to leave. She doesn't have a computer, or internet, or anything. Sometimes I let her use my stuff, because she looks so sad, this woman, almost fifty, 'round my age, but so blue she looks like she's drowning in her own tears some days. I'm a nice guy, I like to help out sometimes.

She doesn't knock on my door, though. She rushes out and I hear the front door slam--gotta fix that piece of shit again, make it so it closes smooth and slow, but something in the mechanism is screwed up again--and so I rush too, to the window that looks out into the street. She's walking, all right, walking fast, and I know just where she's going. To the internet cafe that's around the corner, above that really fancy Indian restaurant. Man, their food is something else.

I always wonder what she does there. I know that's where she's going 'cause she told me that's the only place she can go online, and I told her what about the public libraries, and she said yeah, sure, but the closest one is like two hours away walking, and the bus costs the same amount of money she could spend at the internet cafe, and 'sides, the library only lets you use the computers for forty-five minutes, so why should she do that, right, especially if the ride back is then the same price again on the bus and that's another hour at the cafe so she gets more time for the same money. And fuck the public libraries, she said, and she spat on the ground, because we were both outside smoking.

That's the other thing. Want to save money? Quit smoking such fancy cigarettes. I told her that ones and she shoved the skinny thing in my face, holding the embers right at the bridge of my nose so I probably got all cross-eyed trying to keep watch of it. I froze, which I didn't know I'd do when something like this happened, because honestly, I'm a lucky guy too, not just nice, and I've never gotten into trouble. Not since I was a kid and that doesn't really count. So she's holding this cigarette up between my eyes like she's going to burn a dot right there in a second if I don't shut up, and I do, obviously, because what else was I going to do, and then she told me, look, man, this is my one vice, my only one, and if I give this up then there's nothing to keep me from falling apart. And you know I fall apart already, don't you? I told her I didn't know what she was talking about and she turned away and took another drag and blew it into the night. Fuck, she said, now you're making me feel guilty, and I hate that. I feel guilty already, all the time, you know that? I said I didn't, and that I was sorry. I didn't know what else to say. What else is there to say, right?

She stays at the cafe longer than usual. I know her hours usually because the walls are so thin. It wasn't my idea to split up all the apartments in the building to make twice the money, it was done already before I bought the place, so it's not my fault I can hear everything she does in her living room. It's the same as my living room, only mirrored. But she hasn't come back yet, and now I'm getting worried. It's ten already, ten at night, and she usually comes back two hours after she leaves or thereabouts, which was six hours ago, no, seven actually because I turned the game on right after she left.

I get my phone and call her. I know her number--gotta, she's a tenant, I know everyone's numbers--but she doesn't pick up and I don't leave a message because this is now, right, no one listens to their messages. I know that well enough from my daughters. And my son, too, though he's kind of old school and likes messages sometimes. Especially on his birthday, if he doesn't pick up, I still sing him happy birthday to the answering machine and then he calls me up drunk with his friends and says he has the best dad in the world, and that's always a good thing to hear.

But Julia, she doesn't pick up, and now I'm getting worried. So I look up the number for the internet cafe, and I wonder if they're even listed online, if they're even legal really, but they are, and so I call them. I tell them I'm worried about a friend of mine with dyed black hair--there's another thing she could save on, but after that cigarette incident I was never going to offer advice again--who I knew went there, but the girl on the phone says she never saw anyone like that come in today, though she's seen her other days.

I try to stop worrying, because Julia is just my tenant, that's all, and maybe kind of a friend when we smoke together and bitch about life, but still, she's not my responsibility and I shouldn't be worrying about her, not the way I am, anyway. I get a beer from the fridge and I watch some movie about gangsters that's been in my queue for a while, and it's midnight and plenty of people come in and out, it's a Sunday, after all, some people have been out all day or are going to their night jobs or they're just plain partiers and go out every night no matter what, I mean I've got plenty of college students here, both community and not, and they like to go wild kind of whenever.

Sleep doesn't come, and it's not because of the door slamming all the time. I'm used to that, the damn mechanism breaks every six months or something, I've been fixing the damn thing for years. Plus there's a bus station right outside and so there's buses coming and going all night and I'm used to that too. I can't sleep without noise, honestly, like once when there was this strike and the buses weren't running for a while, I was so tired all the time because I just slept awful, every creak in the apartment woke me up because there wasn't a bigger noise to keep me asleep.

At three, because every time I turn to my right side I see it, the bold red letters, I hear her come back. The front door slams, and then her door opens quietly, but its always been a little creaky and she has to pull it hard to get it to close all the way, so even though she's trying to be quiet, I hear her. I hear her, and she's not crying, though I think that's what it is at first.

She's laughing. Julia's laughing. And she's jumping up and down, which I can feel in my bed, because she's doing it in her bedroom which is on the other side of mine, another mirror. She's laughing and it scares me. Julia crying--I know her--but not Julia laughing. Julia angry, sure. Julia sad, sure. Julia doing okay, sometimes I see that. But Julia laughing? It sounds mad, crazy mad, and it keeps going. But with that, and the buses, and knowing she's back, I think I can finally sleep.

Ilana Masad is a queer Israeli-American fiction writer and book critic. Her work has appeared in The New Yorker, the New York Times, McSweeney's, Joyland, StoryQuarterly, the Washington Post, the Guardian, LA Times, and more. She is the founder and host of The Other Stories, a podcast featuring new, emerging, and established fiction writers.

What Isn’t Mine Is Mine: Accepting Intergenerational Trauma

We inherit trauma through the actions of family members and through the stories they share.

Death and My Bird Brain

After I took the picture I thought of death.

The waiter informed me that I was bothering the other diners with my weeping.

If He Had Been Asked

The Google Docs Will See You Now